'A' or 'Alif' the first letter of Persian alphabet, is a prominent vowel in Farsi language. It is the first letter of Abjad numeral system which represents number one in this system. Alif signifies the Taurus astrological sign. In mystical, philosophical, and rhetorical literature, Alif represents unique God, Holy Spirit, God's mercy; Adam's the father, abstract sphere, solitude, and the single mystery and etc.  Due to its special form and position and some other unique features, letter Alif is one of the most used letters in order to create the original themes and poetic areas, mot and elegant expressions and compounds in Persian literature, two distinguished story-teller lyrical poets that are Nezami as a pioneer in lyrical verses and Jami as a laureate in this field. Alif is a leading in most of poetry by these poets meanings like consistent and firm colossal stature, handsomeness, oblong, tense and stretched. It also signifies greatness, proud and honor, slimness, uprightness, stability, resistance, persistence, staunchness, loyalty, faithfulness and standing on one's promise. Alif has fallen in love with its stature. Since Alif has accent-like sign overhead, it is rebellious. Despite having tongue, it is dumb and silent. It is regarded as one of the poorest in terms of wealth among letters. It symbolizes poverty, abjection, destitution, vacancy, pauperism, beggary, inexistence, absence, loss, and self-denial. It also suggests nakedness, nudity, embarrassment, self-evidence, preparedness, distress and confusion and adornment. It carries meanings like solitude, individualism, loneliness, uniqueness, detachment, freedom, honesty, frankness, and innocence. Alif is motionless and stagnant. Its creation begins with points and dots. All letters and numbers then are founded upon this letter. Alif is the first letter of creation. It also indicates minuteness, brevity and tininess. Alif is the most common simile in Persian literature and the poetry's and prose's images or contents used in Persian literature are described. It was compared to needles, thorn, moon crescent, sticks, pens and plumes, fingers, arrows, bolts, cedars, gallows and scaffolds, newly grown whiskers or beard,  half or full moon, and etc. This article tries to study the literary, artistic and video applications of letter Alif in Nezami and Jami poetry. 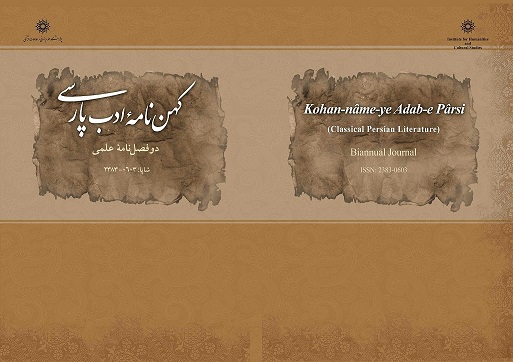